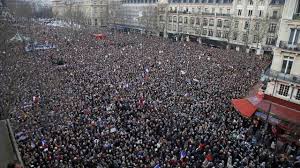 January’s shocking attacks have undoubtedly left their mark on France, but the long-term political implications are yet to unfold

It is still unclear whether the 7 and 9 January killings in Paris, and the ensuing historical march, will have lasting repercussions on French politics. A remarkable climate of national unity and an unexpected wave of global solidarity immediately followed the attacks. Four million people, including 40 heads of states and governments, marched on Sunday 11 January in Paris to defend freedom of expression and stand up against terrorism and antisemitism. A crossbench Marseillaise was sung in the Assemblée Nationale – a first since 1918. Unsurprisingly, however, intellectual and political divisions quickly resumed. This is not necessarily bad news in a democracy, but it places the president and his prime minister in a very challenging position.

Freedom of expression, and its price

The indignation and sadness that surrounded the murder of the Charlie Hebdo cartoonists did not prevent a heated debate on the limits of freedom of expression from starting again. Like in 2006 and 2012, when Charlie Hebdo published Muhammad cartoons, this debate is splitting the Parisian intelligentsia and French people alike. Many pundits are questioning again the editorial choices of the magazine, making clear their position is no excuse for the killings whatsoever. Unsurprisingly, they come under the heavy fire of those who had stood up for Charlie in the past. On social media, a popular line became “il n’y a pas de mais” (there is no but) in response to those who wrote “Je suis Charlie mais…”, thus trying to qualify their tribute to the magazine.

As the Muhammad cover published on 14 January showed again, the principled defence of freedom of expression has a price. Despite a very touching message of forgiveness, the new cover triggered angry reactions among French Muslims and violent and deadly protests across the Muslim world. A political, if not geopolitical question is therefore how long the French and their elites will be ready to lead a battle that pits them against the Muslim world and provides radical Muslim leaders with a red herring to win the support of moderate majorities.

A second major debate raging after Charlie relates to explaining the radicalisation of three young Frenchmen, and, more broadly, the spread of salafisme (fundamentalism) in French society. A 2012 public inquiry estimated that 12,000-15,000 French Muslims have embraced this very strict interpretation of Islam. Was the dismal economic and social state of French suburban towns decisive in the personal journey of the Kouachi brothers and Amedy Coulibaly? Or is France simply under the threat of global jihad?

According to the first argument, the killers are, ultimately, the product of sharp inequalities, social separatism and widespread discrimination against people of immigrant background in France. Some leftwing voices in the Parti Socialiste (PS) were, for instance, quick to denounce recent spending cuts in the “politique de la ville”, a programme targeted at relegated areas, which was initiated by PS governments in the 1980s. This argument clearly received some traction after Manuel Valls, the former mayor of Evry – a suburban town in the south of Paris – denounced asituation of ‘apartheid’ in a speech last week.

Nevertheless, it falls short of explaining why some young people growing up in these neighbourhoods do well and some others do not. Family background obviously plays a role. But many commentators are also stressing the fact that there is no such thing as a westernised or a French Islam. Today imams preaching in mosques and prisons escape any kind of public training and authorisation. The money supporting the construction of mosques often comes from abroad. Nicolas Sarkozy’s attempt, in 2003, to set up a body representing French Muslims (Conseil français du culte musulman) did not make much difference.

Tackling this situation might necessitate adjustments to laïcité, the strict form of secularism in place in France since 1905. A core laïcité principle is that “the Republic neither recognises, nor salaries, nor subsidises any religion”. This very principle has been challenged by the development of Islam for a few decades, as there is a huge need for new mosques and imams. Some voices suggest that the 1905 law could be suspended for up to five years in order to upgrade the situation of Islam in a ‘controlled’ manner, ie publicly fund the construction of mosques and the training of imams.

These debates place the government and the PS majority in a delicate position of arbitration. So far, François Hollande and Manuel Valls have won plaudits for their crisis management. They were in tune with the nation’s sorrow. The president’s hug with a surviving Charlie Hebdo team member at the 11 January march symbolised this reunion between a people and their leader. They also displayed political inspiration and vision. A key moment was the ceremony granting French citizenship to Lassanah Batily, the Mali-born and Muslim employee of the kosher grocery shop who helped save a dozen of lives. Manuel Valls seized the opportunity to pay tribute to the vast majority of French Muslims who stand up for ‘republican’ values. This likely contributed to the fact that the French people’s views on Islam have not deteriorated after the attacks.

The most visible political impact of these episodes has been the spectacular surge in opinion polls enjoyed by the executive couple. Pollsters recorded a surge by 10 to 21 percentage points for Hollande, and by eight to by 17 points for Valls. For a government which was hitting the bottom, this is providential. It also comes in stark contrast with the misfortunes of Marine Le Pen and Nicolas Sarkozy, both accused of playing petty politics at a historical moment. While the former refused to march in Paris unless she was formally invited, the latter arguably looked ridiculouswhen he stepped out to make sure he would appear on the official leaders photograph.

However, there is no space for government complacency. Beyond the strong reaffirmation of common values, tough choices and bold initiatives are needed to respond to the level of anxiety and uncertainty that cuts across French society. How should Islam be organised in France, and should the laïcité law be amended? How far is the left ready to embrace a further tightening of security measures such as the passenger name records directive, which is currently being discussed in the European parliament? How to reassure French Jews and make sure classes on Shoah can be run smoothly in every French school?

This comes at a moment when the French economy is at a stop and the parliament is debating the divisive Macron law, which pits the government against a significant group of Socialist MPs. If the executive couple wants stay above water, they desperately need results on the economic front too.

In June, the PS will hold its congress. Before the attacks, it was heralded as a dramatic moment during which the party could be taken over by an anti-government majority. The event is now likely to be less confrontational in the solidarity climate that still prevails. But there are still five months to go until then, and Hollande should probably do more than allow events to decide on his fate.